Possibly one of the most divisive issues in Peterborough for many years has been the development of the Parkway. It is a classical debate between those who see more roads as key to a better city and those who reject that argument and would prefer a greener city with more parkland. It is a debate we thought was put to bed when citizens were allowed to vote on the issue and rejected developing the Parkway. 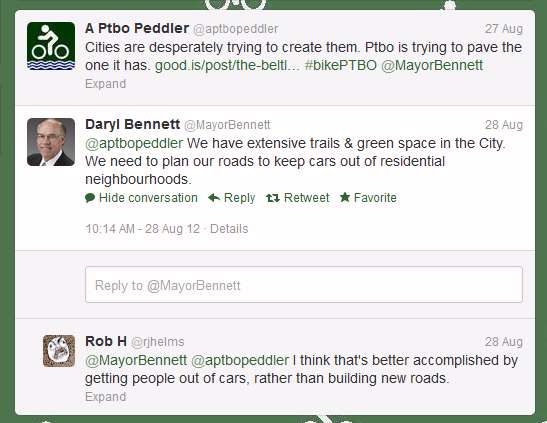 Not to be deterred, proponents of the Parkway kept on pushing their plans forward and somehow the Parkway was back on the agenda. This happened somewhat by stealth as portions of the Parkway became a near necessity when the powers-that-be decided to build the new Regional hospital where the main City hospital was—a most inaccessible spot by road. Most recently, in an act of overturning the will of the people, complete development of the Parkway was approved by City Council in the new City transportation master plan.

Parkway proponents have, for the most part, stuck to the usual arguments for the road: roads reduce traffic and are needed for development and economic prosperity. These arguments have been countered by people’s changing views on development and the proven fact that more roads do not lead to less traffic. Now a new reason seems to be creeping into the discussion: neighbourhood safety. If we build the Parkway, we’ll keep cars out of neighbourhoods. Such an argument is made in Mayor Bennett’s response to a tweet made drawing attention to how many cities would die for the sort of linear parks we have in parts of Peterborough (see image above).

It is an effective argument as it plays on people’s fears. Who wouldn’t want cars out of neighbourhoods? The trouble is, it falls into the old fallacy that more roads are the only way to deal with traffic problems. History has proven that more roads are often not the answer.

Bigger thinking is. Bigger thinking deals with problems from multiple angles, not the easy, obvious solution. And bigger thinking would cause us to stop and think big before we destroy one of the real gems this City possesses: linear, connective parkland.