Home »Bicycles»The Printmaker, his Press and the love of Bikes

Traditional Printmaker embeds bikes and cycling into his life, his business and his art

Many of us know people who go beyond everyday cycling and incorporate cycling into as much of their daily lives as possible. For some, cycling is their recreational passion and you will see them out on road bikes every chance they can get, either alone or riding in clubs like Peterborough Cycling Club. Others integrate cycling into their daily routine, commuting to work, getting back and forth to school or using their bikes for short trips and shopping. Those that are really committed include cycling into as many aspects of their lives as they can: recreation, daily travel and their job. One such person is Jeffrey Macklin of Jackson Creek Press. Whether it is riding Peterborough’s fabulous trails for pleasure, picking up groceries for dinner or meeting a client to discuss a new project, you’ll find Jeffrey on his bike. And when it comes to work, he doesn’t just stop at using the bike to run his business. As a printer of many fine products, bikes make his way into many of his design ideas. 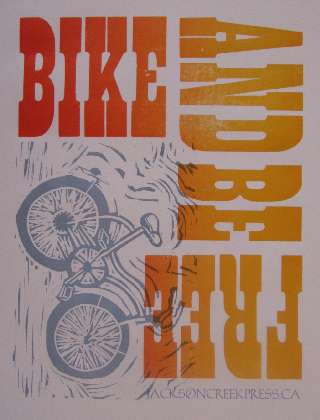 Bike and be Free Poster

Before he began integrating bikes into his work, Jeffrey had a long personal history with bicycles. “Cycling has always been central to my being.” His first BMX bike, which he purchased at a young age, gave him many memories. “Riding it on the freshly paved parking lot and roof of Lansdowne Place when it was under construction will always be a strong memory.” His bike became his gateway to the City. “As kids we moved through this city by bike, day and night. Muddy rides through Yankee Bonnet, in the south end, we explored this city and got it know it like the backs of our hands.” The lessons of childhood stayed with him and he took his bike along when he moved away from Peterborough for school. Whether in Oakville, Guelph or Brampton, his bike remained the most effective method of transportation. “It’s simply, the most effective, most convenient, quickest way to get places.”

Jackson Creek Press is an old school letterpress print shop. Unlike modern print shops, which use recent digital methods and printing processes invented since about 1900, everything in Jeffrey’s shop is created by one process: ink getting squeezed onto paper by some kind of pre-shaped, raised surface—a printing technique that has been around for thousands of years. You can think of it as the professional version of the potato prints you made in kindergarten. Letter shapes are created from individual metal or wooden stamps, one for every letter. Graphic images are created from woodcuts, linoleum engravings or other manual processes. To create an image, be it blocks of letters or graphic designs, Jeffrey has to painstakingly and methodically place every piece of the image in exactly the right place on the press—in reverse and one colour at a time! Unlike modern printers, such as a typical laser unit, Jeffrey’s printed products are very rich and tactile. You can feel the ink that has been pushed into the paper by the printing press. The results are just beautiful—just like any fine artisanal craft. 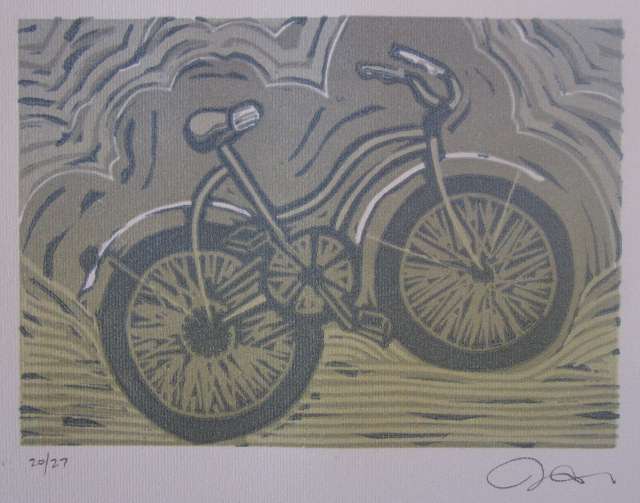 Jeffrey’s work ranges from fine letter-based work, like cards, wedding invitations and business stationary to posters and wall art. It is in the display work that we mostly see the influence of the bike. Several of Jeffrey’s pieces sing the joys of bike riding and bike culture. When asked why the bike, Jeffrey is very straightforward, “It just makes sense that what is on your mind, in your heart—you incorporate into your art. Cycling is such a central part of my life, how could it not be a major influence?” Beyond the day-to-day inspiration, Jeffrey also has a professional one: “My personal hero is Canadian artists Greg Curnoe. I encourage everyone to look this wonderful person up. Curnoe died on his bike in 1992 when his cycling group was taken out by a truck on the outskirts of London, Ontario. For Curnoe, biking was also a featured lifestyle choice and part of his being. It was a very big part of his art practice.” 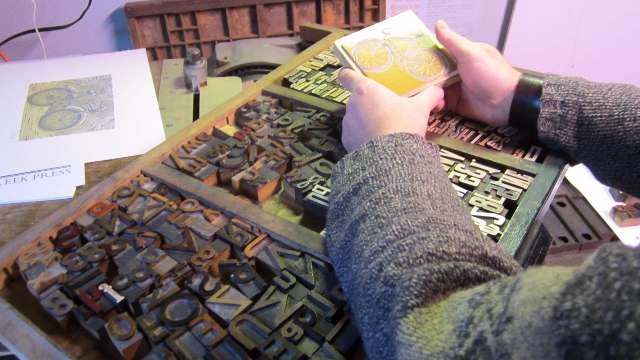 As mentioned, beyond his art, Jeffrey incorporates the bike into as much of his life as he can. “I’ve cycled to my jobs throughout my whole working career; daily and all year round. With some exceptions—it’s how i’ve decided to live.” He notes how cycling helps his thinking processes. “Cycling clears my head, in the morning on the way to a meeting; thoughtful time on my way home from an event. It’s a chance to have the mind cleared; to note things you might not when in a car…” It also offers a way to connect to his community. “…It’s a chance […] to really get to know the city i live in. It offers a very unique perspective on the people and places in Peterborough and beyond.” 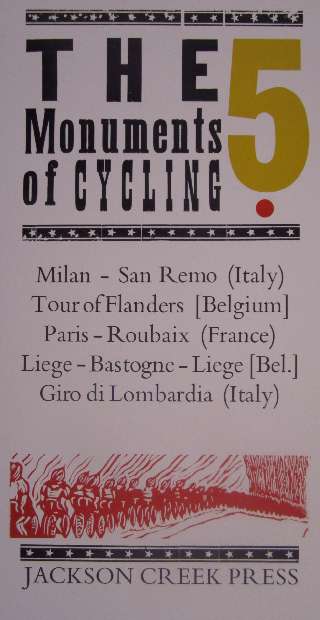 The 5 Monuments of Cycling Poster

Jeffrey is passionate about improving cycling infrastructure and culture in Peterborough. “I see some good things happening and in the future for the cycling scene in Peterborough. Susan Sauve and her team at City Hall are thinking in a progressive way, and if we get their ideas implemented, we will be moving in the right direction.” He does note a few somewhat unique Peterborough aspects to local cycling infrastructure. “I always laugh when riding down George Street—when outside of commuting hours, bike lanes are parking lanes. That ways strikes me as odd – shared parking/bike lanes.” Jeffrey is a big promoter of local bike culture on social media. You will see many #bikeptbo posts on his twitter and Instagram feeds.

You’ll find Jeffrey cycling around town at all hours and in many locations. In winter and when off road, you’ll see him aboard a Trek Mountain bike he purchased at Wild Rock Outfitters and in the summertime he is found aboard a classic CCM 10 speed he picked up at Lumpy Bikes.

If you see him around town, see if he has time to stop and chat about living the bike life. Better yet, if you want some great bike art in your life (or you know someone special who does), give him a call at Jackson Creek Press. 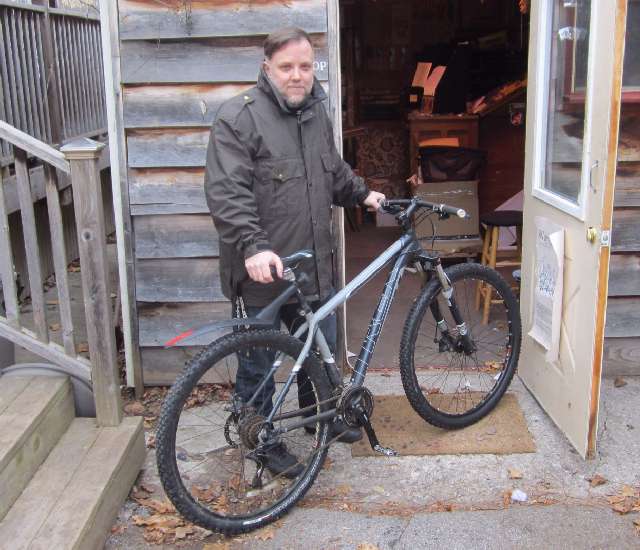 Jeffrey and his workhorse Trek ride

And you can always take time to look up his latest post under the #bikeptbo hashtag.