The City of Peterborough has released their plans for upgrades in city cycling infrastructure for 2015. Upgrades include extended bike lanes, separated bike lanes and extensions to the city trail network. Other projects cover maintenance to existing infrastructure. Many are part of larger, road-based reconstruction projects. While some fall short of what the cycling community had hoped and, in some cases, lobbied for, all are welcome additions and improvements to cycling in the City. 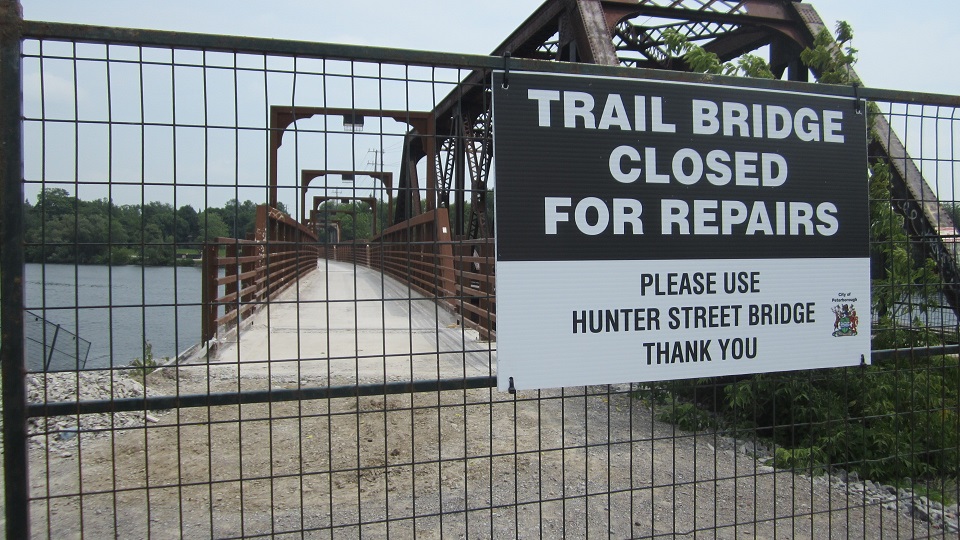 This is great news to all users of the Trans-Canada Trail and it is encouraging that the City plans to move quickly to complete this this project. Currently, getting from Eco Park to the trailhead of the Lang-Hasting trail is difficult and dangerous, especially on bicycle. The link will be one more step to completing the Trans Canada trail coast-to-coast and, importantly, will allow cyclists and trail users a clear and safe route between downtown Peterborough and Keene and Hastings. Now, if the County could find its way to build bike lanes on Heritage Line from the trail down to Keene, the link to Keen would be complete (and barbeque sales would, no doubt, soar).

Rotary Greenway Trail – Trent University
There is a one kilometre gap in the Rotary Greenway Trail between the Rowing Club and Eastbank Drive. The City will build a trail on the east side of River Road between the rowing club and the Faryon pedestrian bridge this summer. Looking ahead to completion in 2016, the City is currently planning how to address the section between Gzowski College and Eastbank Drive (the part North of the bridge).

While a trail is welcome, getting under the Faryon Bridge is nothing short of a nightmare for cyclists. This literal bottleneck is a real gauntlet for cyclists to run. A blind leap of faith at the best of times. It does not look like Trent is open to the idea of increasing the gap under the bridge to accommodate a separated trail so it looks like the situation is not going to get any better soon.

Trans-Canada Trail – Engleburn to Rogers Cove
This section was started two years ago and the City plans to complete the job this year. Sorting out the railway crossing will take longer to address and is not likely to be completed until 2016.

This project (the “stairway to heaven”) had become a bit worrying and a definite eyesore. One got the sense that progress in trail infrastructure development in the City had been abandoned. Good to see it completed. The railway crossing is dangerous due to the slight angle difference between the road and the tracks.

Again, great news from the City.

Also good news as this will improve connectivity of the bike lane network.

Ashburnham Drive
Reconstruction of Ashburnham Drive between Lansdowne Street and Maria Street is underway and will continue into 2016. The design includes a multi-use trail on the west side of the street and on-road cycling lanes.

Again, good news, but somewhat frustrating as original plans for a fuller complete street solution were scaled back as part of a cost cutting measure.

Brealey Drive
Reconstruction of Brealey Drive between Fleming Drive and Lansdowne Street includes plans for cycling infrastructure, primarily a protected two-way cycling track in the boulevard on the west side of the road.

Ravenwood Drive to Trans-Canada Trail Link
Due to construction on Parkhill Road, this trail link will be closed for the duration of the summer.

CP Rail Pedestrian/Cycling Bridge
This bridge, located near the Holiday Inn, will be closed for approximately 4 weeks from mid-June to mid-July to allow the contractor to replace substandard concrete that was used on the bridge decking.

While an annoyance to the many users of the bridge, these repairs are needed to protect the bridge. It is just a shame this substandard work happened in the first place.

Hunter Street Bridge
The City plans to repaint the cycling lanes on the Hunter Street bridge with a more durable product this July.

We wait for this with bated breath. This repaint has taken an extremely long time. We understand there were problems with the supply of the newer, more durable product but these delays are frustrating and dangerous to people riding bicycles across the bridge. The problem is doubly bad now that the pedestrian bridge is closed. There have been reports of verbal assaults of people riding bikes by those driving cars who do not appear to realise there is a bike lane on the bridge.

Update: City crews painted the lines overnight on July 8th. A big thank you from the city cycling community.