Canadian designed bike is one big break in geometry

Ask someone to draw a bicycle and they will nearly always draw a basic diamond-framed object. Sure, it may get flattened or distorted slightly, but the two triangle shape is the mainstay of bike building. Occasionally, other weird shapes or designs appear, but too often they are concept bikes or the idea never catches on. The exceptions are recumbent bikes and folding bikes, such as the amazing Brompton, which have a useful niche in bikedom. And on the alternate propulsion front, Elliptigo seems to be catching on (we have seen at least one in Peterborough).

So what to make of Roundtail, a Canadian designed bike that substitutes two circles for the usual back triangles to support the back wheel? Will it catch on? Does it offer enough of an advantage to allow it to gain a dedicated following? 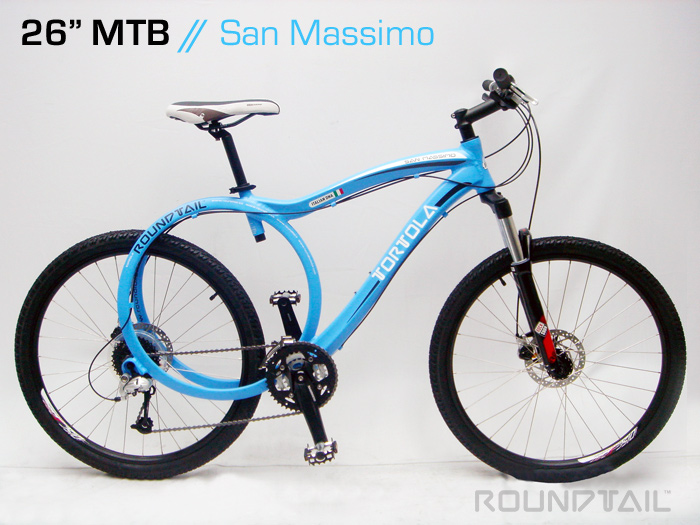 The big advantage of the new design is comfort. The Roundtail, brainchild of Windsor inventor Lou Tortola, absorbs, according to its designer, 60 times the road vibration of the standard diamond-shaped frame. This, it is suggested, leads to less rider fatigue, without compromising side-to-side stability. There are other styling details, such as internal cabling, something that may turn off as many as it turns on. The company suggests the benefits of the frame shape apply to both casual and serious riders and build models for each.

Time will tell if bikes catch on. No matter what, they will be head-turners. The dramatically different shape is complimented by gentle curving in the more traditionally-shaped components of the frame.

Roundtail appear to be relying on in-the-field videos rather than slick commercial advertising to promote their product. There are several videos available out there, but a good place to start is this one where Lou talks about his thinking on developing the Roundtail.

Independent reviews of the bike by people who ride them on an ongoing basis (as opposed to descriptions of it) are hard to find. If anyone has one, let us know.