Cargo bikes can be broken down to three main types (note we said main types, there are all sorts of amazing cargo bikes out there). The first, and probably the most approachable, is the longtail. A longtail is, as the name suggests, a standard bike that has an extended frame at the rear end. They are popular because they are relatively inexpensive, they ride most like a traditional bike and they don’t look that different. Popular brands are the Surley Big Dummy, Yuba’s Mundo and, popular for many, the XtraCycle, longtail conversion, that allows you to convert a standard bicycle into a longtail. Longtails carry up to about 90 kg in weight and can carry some pretty spectacular loads. Probably, Peterborough’s most noticeable longtail is City Transportation Demand Management Planner Susan Sauvé’s XtraCycle (pictured above from our interview with her, back in September).

At the other end of the specialization spectrum are the box bikes, also called long johns and, more popular recently, bakfiets (or just fiets). Bakfiets, if we have it right, translates to cargo bike, but the term, as used in North America, seems to apply to the front box style bikes, popular in the Netherlands. Box bikes are specialized cargo bikes that have large frames designed to support some kind of cargo container or carrier surface. While they are, for the most part, surprisingly nimble and efficient, they are not the sort of bike you would normally use for a quick trip. They require more space to maneuver and to park and, depending on the load, require more effort to propel along.
There are numerous manufacturers of box bikes and several configurations for the cargo area. Cargo in front appears to be the more popular configuration. Popular front box bikes in North America are Babboe, Bakfiets and Metrofiets. Madsen is a North American builder of a creative line of rear box cargo bikes. 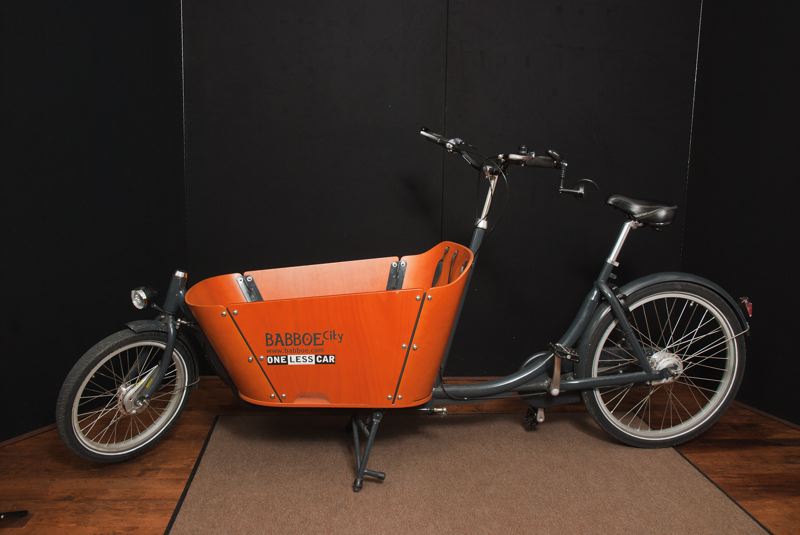 We have only come across one box bike in Peterborough: a Babboe owned by a couple in East City. It was a very popular guest bike at the recent Bike Summit in Peterborough (see picture above, courtesy of Chris Lingard). We will have a profile on the family and their bike in an upcoming post on aPTBOpeddler.

One other type of cargo bike that appears less popular these days is the front loader, also known as a baker’s bike or deli bike after the type of shops that used to use these bikes for delivery. Front loaders place the cargo over the front wheel in some type of box. On the plus side, this means the bike is about the size of a normal bike. The negatives include a relatively smaller load capability and less control over the bike, although changes in the basic frame design, including a smaller front wheel, can overcome some of the control problems.

Pashley of England makes a limited number of their delibikes (Toronto feature article here) while Civia makes the Halstead, a nimble cargo bike. Bike Spotting, our regular feature on interesting bikes around Peterborugh, has yet to come across a front loader in Peterborough (although if you have, let us know).

One other type of cargo bike is the Cargo Trike, which places a carrying surface between a pair of front wheels (unlike most tricycles, which have the paired wheels in back). Interestingly, Peterborough is home to a custom cargo trike and trailer builder, Conifer Cycle (yes, we intend to follow up).

Cargo Bikes for all Reasons

Cargo bikes are pretty amazing. At times they seem to defy physics and human power in what they can carry. Human ingenuity is put to the test, or perhaps shines brightest, when it comes to fitting a load of material on to a bike. As stated, Cargo bikes make it possible to integrate the bicycle into more of our daily lives, increasing health, reducing pollution and putting more money into our pockets and, therefore, into our community. And those are all good things.

For a good overview of cargo bikes in Canada check out Cargo bike Canada from IBikeTO.ca

Article focusing on cargo bike use by businesses in London by the Guardian.

Homepage for Tom’s Cargo Bikes, a custom cargo bike builder in Portland, Oregon (where else?). Illustrates nicely that cargo bikes do not have to be expensive.