The first icy day of the season is always the hardest.

As with past years, it seems that the point at which you have to really accept it is winter came late this year. Up until the week of the Solstice, while the temperatures had been below zero, there was no snow and the roads were bare. That all changed over the Christmas week and, to the delight of all those wishing for a white Christmas (and who of us isn’t among that group), a good layer of snow covered the ground (and much of the roads) by the New Year. 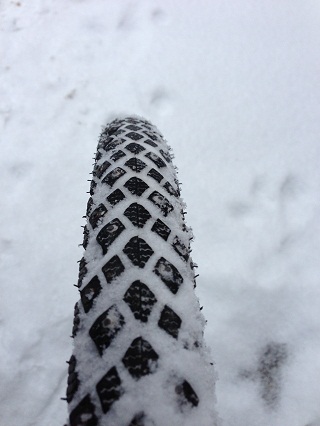 The change in conditions was heightened for me personally in that, over the Solstice to New Year period, I was on a near two-week break from my normal workday commute (a bunch of year-end “use ’em or lose ’em” vacation days). I waited it out in case there was a warming trend (unlikely, but who knows these days) and on New Year’s Day I switched over to my Marathon winter spikes. I also took the time to do a detailed check on the bike and a defensive lube job on all the cables, moving parts and the chain. Come the morning of January 2, I would be ready for that first snowy ride.

The next morning, what wasn’t quite ready was my mindset. As I sat under the carport doing the last second checks of my gear and pulling up the cuffs of my new cold-weather gloves (a post Christmas deal at Wild Rock), all I could think about was everything I didn’t like about winter riding. Such as: how all the “first five minutes” cold spots on your body seem extra cold until you get going; how the bike lane has been reduced to a thin strip at the edge of a miniature glacier field full of ridges and frozen tire tracks waiting to spill you over (why is it the ploughs never seem to get to the side of the road?); the joys of negotiating your way around parked cars that are that much more further away from the curb because of the snow banks or, in some cases, because passengers don’t want to get their feet snowy as they step out of the car; how I’d be lifting the bike several times at the ends of pathways blocked by crusty, impenetrable walls of crusty snow from the road ploughs; how much longer it had taken me to suit up; how much slower the ride would be and how much longer it would take me to get changed when I got to work. Yes, I was an unreasonable, pouty, whiny mass of dark thoughts as I sat there in the crisp minus eight degree air.

And then the ride started and all the familiar sensations came flooding back: the few seconds of worry when the tires first hit the icy and slightly snowy road; the tangy smell of the cold, dry air; the buzzing rumble of the spikes when they hit the clear patches of asphalt; the weird stares from the car commuters as they set out from their suburban lairs. With every turn of the wheels, my mood improved. A neighbour, out walking his dog was coming up the road. We exchanged greetings of “Good Morning” and “Happy New Year” as we passed. Yes, there were the lifts over the ice walls on the paths, but by the time I hit the main road I was feeling better.

Sharing a friendly “hello” and wave with a chilly looking group of police officers conducting a speed check, further improved my mood. The winter tires now buzzed on the bare road and I was reminded of one of the perks of winter driving: the better workout I get from the extra resistance of the fatter snow tires. Other reminders of the upside of winter commuting came back to me as I made my way into town. Drivers, for the most part, seem to give you lots of extra space on icy or snowy roads. Possibly, this is because they think you are about to wipe out at any second and they may crash into you. Facing the shared problems of winter driving seems to stimulate the cooperation parts of the brain for everyone and drivers seem more willing to share the road, both with you and each other (at least here in Peterborough). 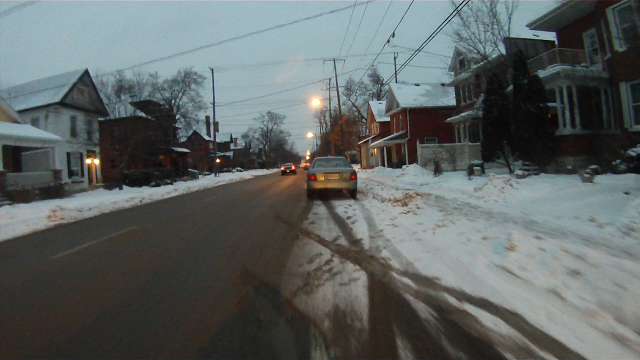 If you are going to park in the bike lane, no worries, as I can’t really use it, but at least tuck it to the right, huh?

Sure, there were the usual rough spots: some really ridged up ice piles in the bike lane; icy debris ridges from a few home owners that think the street is a great place to shovel the snow from their driveways and the aforementioned badly parked cars forcing you out further into traffic as they block the bike lane. One upside from this is that car drivers see how badly the person has parked and, on no less than three occasions, slow down to let me pass the parked car fist rather than pull off the usual “I can get past this cyclist before the parked car” maneuver. It seems bad parking shifts the blame from you, the cyclist, to the offending driver and you get a break (and a brake). Finally, as I pulled into work, I was reminded of one of the main reasons I ride: arriving at work energised, invigorated and ready to take on the day.

If I had any doubts about riding in the winter and, as a result, considering taking the bus or, in a fit of weakness, drive my truck on a regular basis, it was finally put to rest on my ride home. As the dark of the evening closed in, I was riding up Water Street by the Zoo. As I slowed down to wait for some southbound traffic a few hundred metres ahead, I saw a small, dark object coming down my lane in front of me. It was a fox and he trotted up close to me and stopped. We looked at each other for a few seconds, then he (or she) ambled off into the Zoo and, once the traffic passed, I crossed over Water Street and hoisted the bike over the snow bank. I watched him meander up into the Zoo and give me one last look back before he disappeared into the trees. I then walked the bike along the snowy path before resuming my ride.

I remembered then what keeps me riding year ’round: when it comes to commuting, a bad day riding my bike is nearly always better than a good day driving a car.

What makes your winter ride worthwhile?