Peterborough is a city full of cyclists. Many of those cyclists try to make the bicycle as big a part of their everyday life as they can. This may be through daily commuting, having a couple of different bikes for different purposes or even joining a cycling group or the local cycling club. Eric Cardinal and Lindsay Howell have pushed the idea of “B!ke more, drive less” to the max and have made the bike, most recently a cargo bike, the centre of their transportation world.

They have both ridden bikes for a long time, but it was when their young son Gage began to show an interest in riding bikes that they really had to examine how cycling could fit into an integrated family transportation solution. Back then, Eric traded in his motorcycle and picked up two used bikes: an Electra Chopper-Bike called the Rockabilly Boogie (discontinued in 2008) and a Terra Path 8 Recumbent Tadpole Trike. The recumbent was important as it kept the adult rider down at eye-level with Gage, allowing for direct interaction and guidance as he began to flex his cycling muscles riding around the block.

Eric and Lindsay were committed to making cycling an integral part of their lives, biking for fun and leisure, riding to work, shopping and other errands. Gage was always part of the picture, and tagged along using, first, rear child carrier seats, then front carriers, a trailer, and, finally, a Weehoo. Even vacations became opportunities to get out riding. In 2011, they vacationed by bike in Northern Québec around Lac Saint-Jean. Since Gage wanted to take his bike and ride for at least part of the trip, the loading logistics would be a challenge. Lindsay rode the Electra, towing the Weehoo and some equipment; Eric rode the recumbent, pulling a trailer full of equipment and Gage’s bike. Gage showed the extra effort wasn’t wasted by riding several kilometres each day. 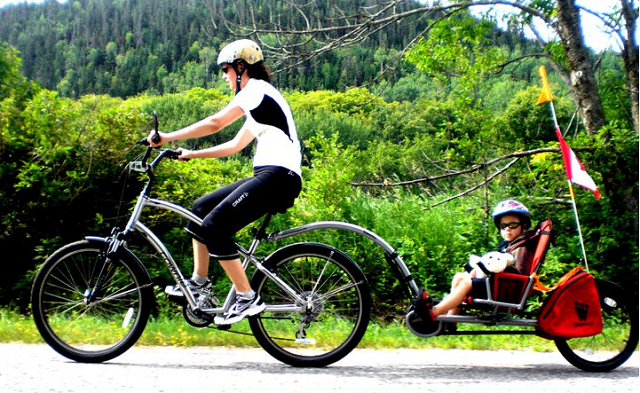 Lindsay and Gage on a bike vacation in Québec

While the current set-up was fine for most situations, it was clear they needed more hauling power. With this in mind, they began researching cargo bikes through various channels, including their favourite cycling magazine, Momentum (out of Vancouver). Through Momentum, they came across a video put out by Liz Canning that was seeking stories for a crowdsourced documentary on the emergent cargo bike movement. While they didn’t have a cargo bike yet, material they uncovered through the video convinced them they were on the right track. The availability of cargo bikes in Ontario was a key factor in the selection process. 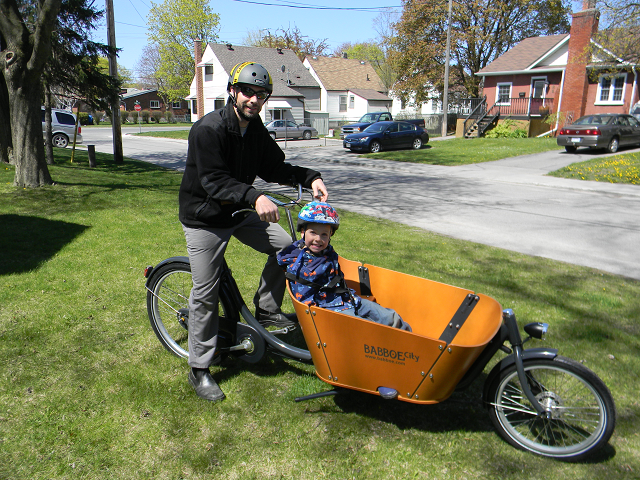 After initially deciding on an Xtracycle bike extension, they decided to jump in with both feet and looked at a Bakefiet or Long John style bike. The decision was a worrying one. A full box-style bike was the most expensive option on the table. What if it didn’t fit their needs or was too much bike to handle? Driving them to the Bakefiets bike was the impending arrival of their second child. With the box of a Long John style bike, they would have a secure and protected place to strap down a baby car seat and have room for Gage and other items. 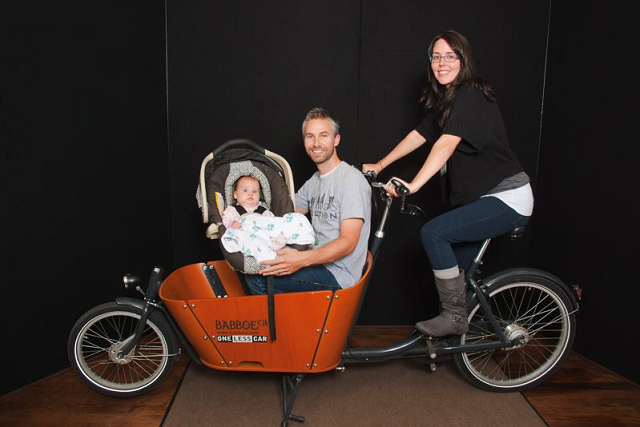 Eric Cardinal, Lindsay Howell and baby Elle all aboard their Babboe City at the 2012 Peterborough Bike Summit.
The Babboe was a big hit at the Summit and many had their cargo portrait taken with (or on) it!
Image Copyright 2012, Chris Lingard, Photographer

They ordered a Babboe City from Downtown Bike Hounds in Hamilton. The staff there were great and very accommodating. In a matter of days, they had the bike in their store and were ready for Eric to pick it up. However, at nearly 8 feet long, the bike was too big for Eric to pick up assembled, so Bikehounds sold it in 3 large boxes (with a discount) and Eric had to assemble the bike in his garage. Working from the Dutch assembly instructions and an Internet translation website as well as drawing on his experience as a volunteer at B!ke, four hours of focused work produced the final assembled bike (and a new appreciation for well-drawn diagrams and pictures). (FYI: since then, Peterborough’s Green Street Bikes has become a Babboe dealer). 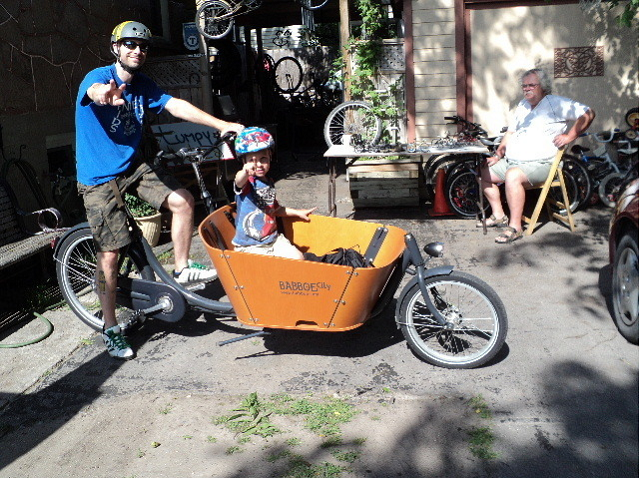 The Babboe was a big hit. Within five months they put over 700 kms on the Babboe, cycling around this great, bike-friendly city. With a nearly 400 pound weight capacity, it is a very capable bike. It has gone for groceries—lots and lots of groceries. It has made many trips to the mall, the hardware store, Costco, the Zoo, the Beer store, the park, the splash pads, the beach, Gage’s school, play dates, and many other places within the city of Peterborough. It can do it all. It has had many passenger configurations: just the driver, one kid, two kids, three kids, a pregnant lady plus one kid, a boy and his dog, a boy and his newborn sister, just the baby…you name it. The bike fit perfectly into their family’s needs and lifestyle. 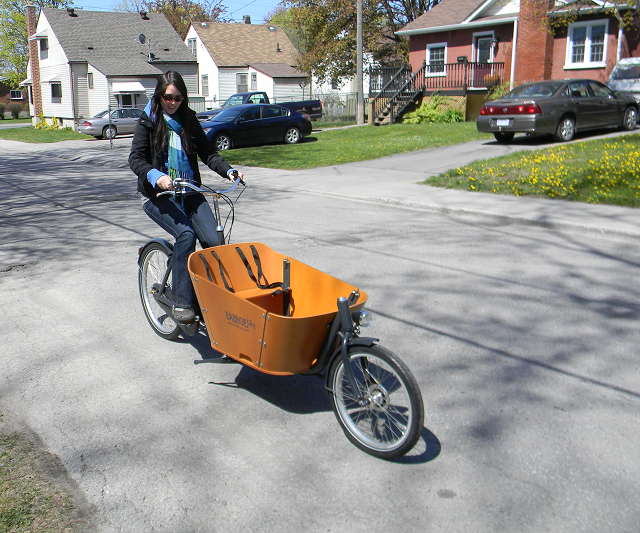 Lindsay tries out the Babboe City. Love at first ride.

Lindsay’s early worries about the size of the bike and her ability to drive it proved to be unfounded. She was at first intimidated by the size of the bike: “Would I be strong enough to ride it around town? Would I lose my balance and injure my precious cargo and myself? I was just plain scared.” While Eric and Gage were riding the bike all over, Lindsay was less sure. Once she tried it however, she was an immediate convert. Getting used to the front wheel being so far away was a bit of a trick at first but confidence came quickly. She now feels more than comfortable taking it out with her daughter and feeling safe doing so (despite the number of Buicks in town). 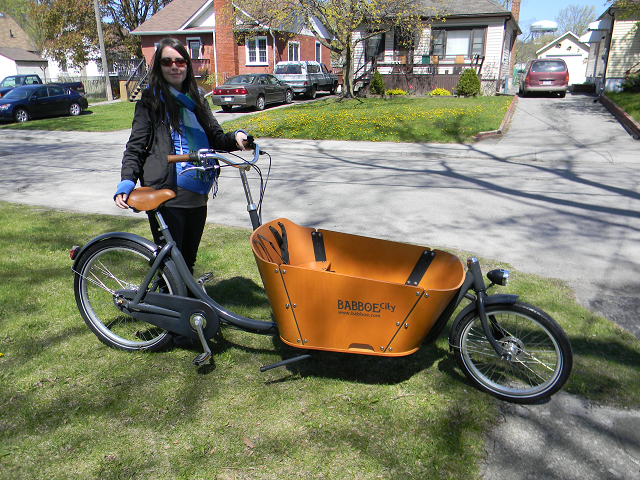 Lindsay with Babboe (and with baby)

While being indispensable to their family as a transport device, the Babboe does have a couple of other feel good benefits. When all else failed at getting baby Elle to settle down and sleep, a ride in the Babboe would soon get her nodding off. People just seem to love the bike, too. The Babboe is probably the first cargo bike of its kind in Peterborough (certainly the only one like it we have seen) and the bike just seems to bring out the smiles from people who see it passing by. The joy of riding (a reality anytime) is that much more infectious when a parent and one or two kids passes by on their bike (or a dog or…whatever). Since the Babboe opens up all sorts of extra options on the transport front, the great feeling of diverting cash from the oil industry to the local economy is just that much bigger, too.

Eric and Lindsay are setting a fine example at pushing the limits on Peterborough’s bike culture and making cycling an everyday reality.

The cargo bike video that initially got Eric and Lindsay thinking about cargo bikes. Inspiring stuff!