July turned out to be a pretty good month for Peterborough Cyclists, especially those who cross the Otonabee River in the Downtown Area. Two long-awaited events occurred within days of each other: bike lanes were finally painted on the Hunter Street Bridge and the pedestrian/bike bridge at the CPR bridge was, unofficially at least, reopened. 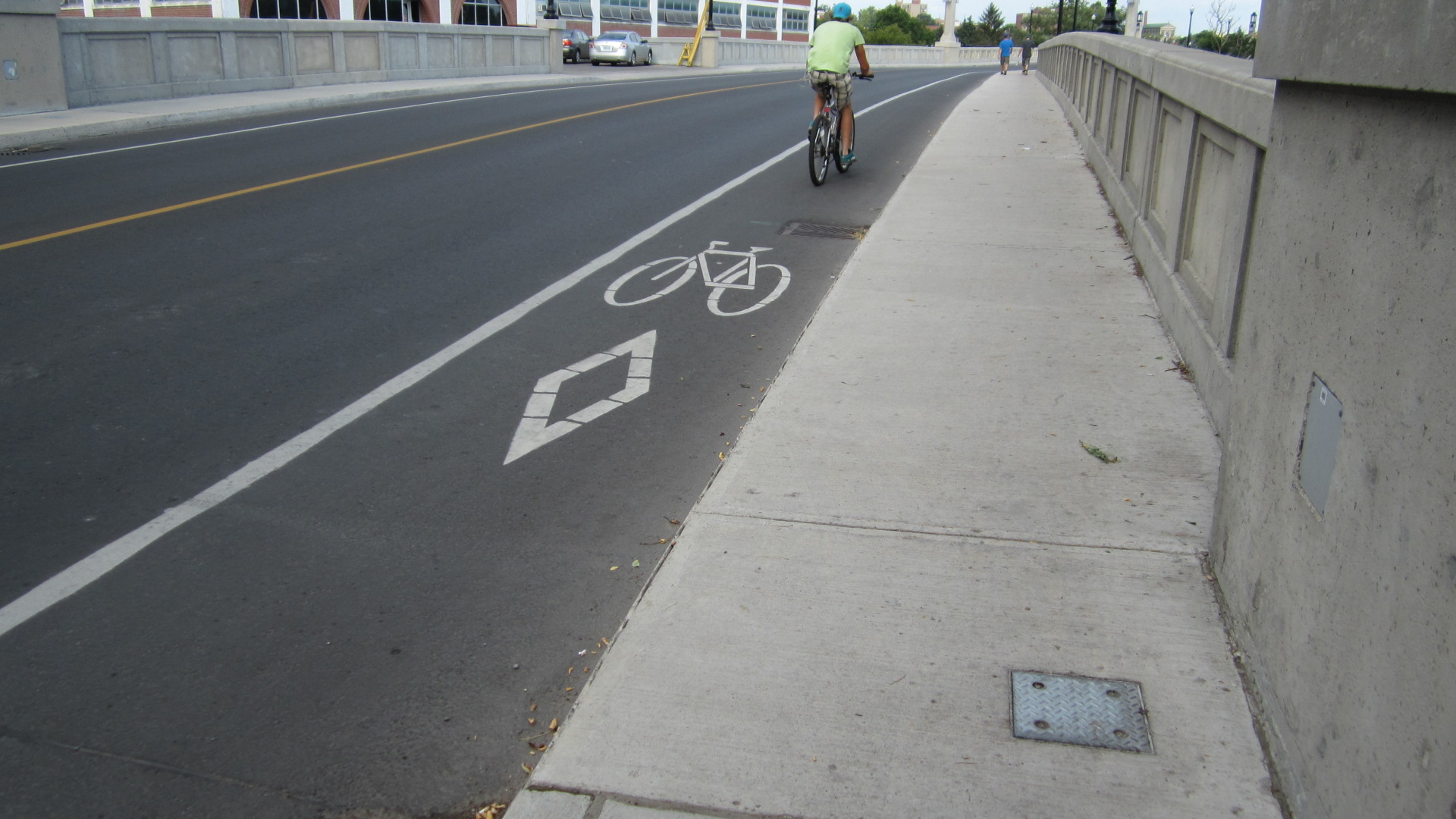 Construction crews are still working on the decking of the bridge and on the trail connections at the eastern end of the CPR bridge, so let’s leave that story for another day (exciting as it is). Further north up-river, for those heading east out of the downtown, the bike lane stripes on the Hunter Street Bridge are nothing short of life-changing. To say they are overdue is an understatement. Rumour has it that Peter Robinson, when writing back to Great Britain for support in settling the local area, included in his provisioning request: “plentie of pigmented emulsions to ensure the clear demarquation the boundrys of common modes of public conveyance over the river”. Seriously, though, the many delays in the reconstruction of the bridge had left that section of Hunter Street a near terror zone for cyclists for far too long.

For those brave enough to tackle the bridge legally and not ride on the sidewalk, the crossing of the Otonabee was an adrenaline filled event, either from the thrill side or the terror side of things. The bridge is somewhat unique in that it has curves in the road approaching both ends (this is after all Peterborough and straight roads are anathema to our transportation culture). These curves caused cars to meander off the centre line of each lane and, too often, squeeze out any cyclist brave enough (or foolish enough) to challenge the gauntlet. For some reason, the bridge also seemed to stimulate a hurry-up response in drivers and many would take the bridge at speeds that caused many a co-users of the bridge much concern.

Doing the crossing by bike usually meant invoking whatever spiritual juju you believed protected your soul, screwing your courage to the sticking-place, putting your head down and blasting across the bridge as fast as your already pounding heart could manage, all before any car noticed you were in transit. The collected mythology of #bikeptbo folklore has stories of many a cyclist, upon reaching the other side safely, dismounting, kneeling and then (à la Pope) kissing the Earth in thanks. On other occasions, if a cyclist decided they did not have the mettle to face the road portion the bridge, the angst was transferred to the sidewalk and was, as a result, shared by cyclist and pedestrian alike.

All of this quickly changed when, one bright day, the white stripes of the bike lanes appeared. Suddenly, car drivers had clear visual guides to help them across the water. It was similar to the moment between Jennifer Grey and Patrick Swayze in “Dirty Dancing”; the understanding was there: “This is my dance space. This is your dance space. I don’t go into yours, you don’t go into mine. You gotta hold the frame”. Like airliners steadfastly obeying the come hither instructions of runway landing lights, cars did now their appointed limits keep. OK, if the road was empty, they would sometimes drift into the bikelane on the inside of the approach curve, but, for the most part, car drivers kept out of the bike lanes. There was much rejoicing among the cycling community, both on social media and elsewhere.

The bike lanes across the bridge are, clearly, a big success. A big thanks to everyone at City Hall who helped bring them about.

That a line of paint can be so powerful is important, especially now, as separated (Dutch-style) bike lanes are suddenly a hot topic of discussion. The value of separated bike lanes is well articulated from a North American perspective in an excellent article at Momentum Magazine. While many things contribute to a more robust cycling culture within society, the suggestion that separated bike lanes are the most important factor in getting people riding is (excuse the pun) riding high right now. This more recent discussion raises the question, “are on-road bike lanes enough?” Such a subject is a complex one, one that is best left to a future post.

For now, however, it is clear: a little paint has gone a long way.

Here are two videos showing what it is like to cross the bridge now. Taken from the PTBO Cycling VideoMap Project.

And if you have thoughts on bikelanes, complete streets, separation and other similar topics, let us know. Perspectives will help the discussion.