Let’s face it, the relationship between the City and the Peterborough Cycling Community is something like a good ride: it has its fair share of ups and downs. We have seen some real advancement, like bike lane improvements and plans for active transportation infrastructure. On the other hand, we have seen some setbacks, like the loss of downtown bike racks and, well…everything to do with the Parkway. While we have been vocal in our critique at times, it is only fair that we send laurels when the City does something right. 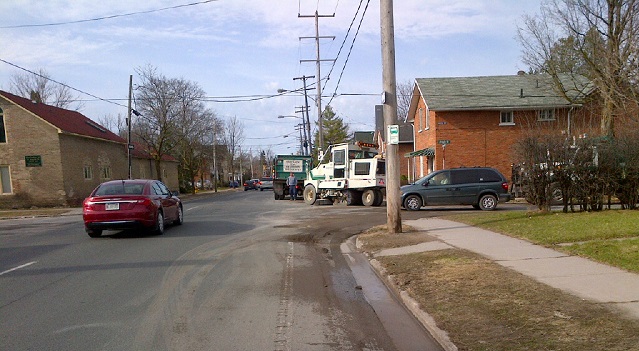 And they have been doing something right in the bike lanes of the City over the past several weeks. Since the first week of April, City crews have been busy sweeping the streets and bike lanes all over town. This is notably earlier than the cleanup programs of previous years. For the most part it appears City crews have been working from the main roads downtown outwards to the residential streets. Teams of one, two or even three street sweepers and their shadowing dump trucks have become a welcome sight on the spring roads. 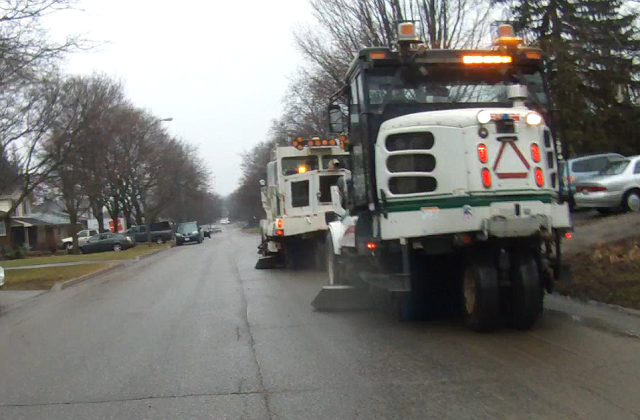 As we all know, there was an awful lot of snow this past winter and that has led to some significant deposits of gravel and dirt. The sweepers do not always make clean sweep the first time and can leave some pockets of dirt in the divots and depressions of our roads. Follow-up visits by the road sweeping crews are cleaning things up and getting the job done. There have been some problem areas where larger banks of ice remained along the sides of the roads. This often happened when homeowners or business owners had piled snow up higher at the edges of the wider driveways or parking areas. Cleanup crews managed to work around these and, by-and-large, have revisited these areas now the ice is gone.

Some main roads, for some inexplicable reason, where not cleared that early. Hilliard and Monaghan are notable examples. And while this did cause some upset for some road users, the cleanup crews have continued working diligently and most streets are now clear. 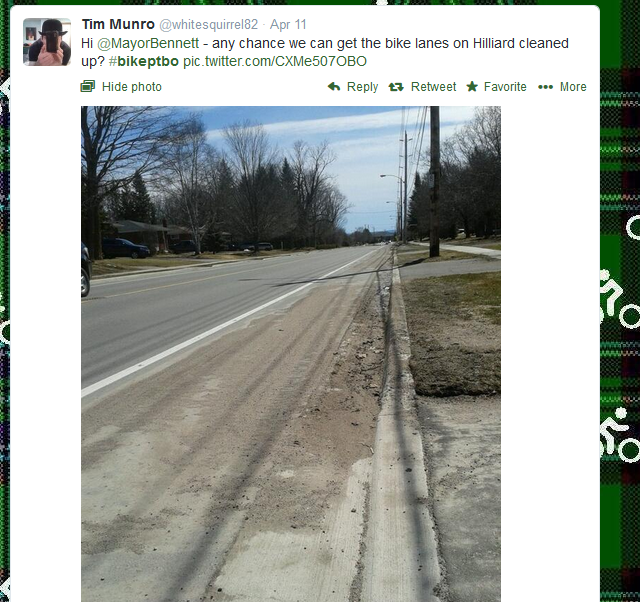 Not All Streets Were Done Right Away

The discussion around cleaning the bike lanes faster did reveal some of the problems related to bike lanes in the great White North. Some asked if the city can work to keep car lanes clear, why couldn’t it do the same for bike lanes? Realistically, keeping bike lanes clear in winter is quite difficult. Even the most cycling friendly and progressive cities report problems, no matter how motivated the roads crews are. The curve of most roads leaves a larger gap under snowplow blades at the edge of the road. Plows work by pushing snow to the side of the road where the bike lanes are and they cannot always push the snow out past the edge of the road, particularly in tighter, downtown areas. This past year, all roads have been pinched by the high snowbanks. Naturally, this leaves the bike lanes vulnerable. While plows move much of the snow, the reality is that getting the last of the snow off of the roadway is done by the action of cars themselves. Hundreds of sets of tires working with the salt distributed on the road are the things that finally get the pavement bare.

While cyclists and car drivers alike welcome the clean roads, the fast cleanup has revealed many of the most problematic cycle lanes. Winter has taken its toll on our roads and this always shows up first along the curbs at the edges of the road and in the bike lanes. Some bike lanes are in very sad condition. Again, Monaghan is a prime example. In many places the road is almost impassable in the bike lane. We can only hope the city follows up with its excellent work clearing the bike lanes with some early bike lane repairs.

In the meantime, we thank the city for their efforts in getting the roads cleaned up as early as possible this year.

Now, could you do something about the obstacles? 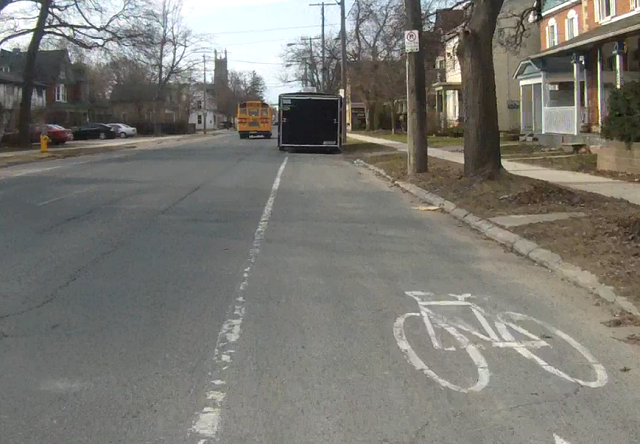