We ask Megan Murphy about her budding love for the bike

Either here, from a number of other social media sites around the p-dot or on her own website, murphyslawfilm.net, you may have heard or read about Peterborough native Megan Murphy as she sought to retrace her late father’s 1973 cycle trip through Ireland. It is a great story of connection, the importance of place and people and more than a little about finding yourself on a bicycle. We followed up on our last post with some questions to Megan that focused on the cycling aspects of her trip. Her answers are very interesting and reveal her growing connection to cycling. 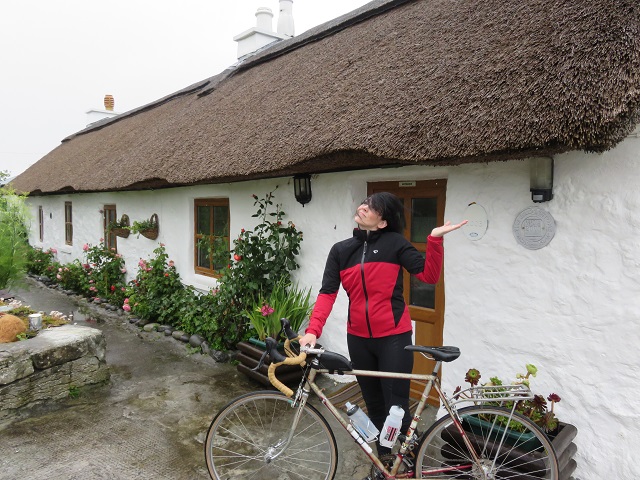 Were you a cyclist before this trip?
-Nope! Not at all. I hadn’t been on a bike since I was about 10 years old. In fact the day I picked up Dad’s refurbished bike, they took me to the back parking lot at Wild Rock to try it out. I couldn’t get my foot into the cage and I almost ran into a dumpster! So the learning curve has been steep to say the least!

How did you train for the trip?
-In 7 months I have gone from being seriously depressed, where the only exercise I did was get up off the couch to go lie down again in bed, to riding my bike 150 km’s a day around the Emerald Isle. Life is funny huh?! About 4 months before I left I hired a personal trainer who set me up on a weights program to build some muscle tone. I started riding an old mountain bike I had, but nothing too serious. I had about 6 weeks with Dad’s bike before I left so I started off riding it around town on the Rotary trail and such. I host a morning radio show out of Cobourg so I had my co-host drive me to the station and I cycled home a few times. But in the week before I left, I was so busy with filming details that I didn’t even get on the bike once! I was quite nervous that I wouldn’t be ready when the wheels hit the ground in Ireland!

Megan catching some breath after a long climb

What do you like best about cycling?
-I like that you can get somewhere! I like the wind in my hair. I like feeling connected to this piece of equipment and knowing that my own horsepower can move us from A to B. I like the reward of getting to the top of the hill and seeing the view. I like downhills! I like feeling like a kid again, just hopping on my bike to go somewhere.

How does it feel to ride your father’s bike?
-It’s hard to explain. When someone dies we often keep a touchstone of some kind that reminds us of the person. A sweater, a locket, something that represents them and instantly takes us to a place of memory. The bike is that, but more. It also represents my dad’s essence. His sense of adventure, freedom and possibility. It’s a bit of a time machine. I feel connected to my father while riding the bike and yet I feel like I’m not just riding in the past, I’m creating a new relationship with the bike and we’re headed for the future!

How is the warhorse behaving?
-She’s grand! Like most of us over a certain age, she makes some strange noises when exerting herself. She creaks a bit when you do this, and rattles a bit when you do that, but she’s in fine form nonetheless. When the newsagent in Listowel lifted her up and commented on her weight, she didn’t take it personally. She’s not vain. What she lacks in fresh paint, she makes up for in personality and gusto. When those new bikes, that seem to be made of air and dreams, pass her on the roadway, she just chuckles at their youthful exuberance. She’s a 1973 Peugeot. Hand crafted in steel. She’s French and runs on wine, cheese and attitude. She has nothing to prove and she’s teaching me a lot. I’m proud of her!

What does you feel you get from touring by bike as opposed to a car?
-Aside from knowing intimately where every pothole in Ireland exists!? I could also be an expert in the best types of asphalt to lay down for cyclists! You’re moving at a slower pace than in a car, but still fast enough to be productive and put miles between you and the previous destination. You see more. You smell more. You meet more people. You connect to people differently because you have a talk piece. You can stop and literally smell the roses. And you shop less! There’s no better cure for retail therapy than asking yourself if you really want to carry that item up a mountain with you! You feel a greater sense of connection to a place when you’ve worked hard for every mile you’ve seen.

Megan celebrates after a climb

Do you think you will keep riding after the trip?
-I’d like to. And I’d like to keep riding my dad’s bike. I’d like to make cycling a habit. It’s easy to fall back into old routines, but I liked when my days work involved getting somewhere on those 2 wheels. I’d like to keep that in my life. I’d like to tour again on my bike. Without a film crew! Just me, the bike, the open road and that seductive mistress, possibility!

Thank you again for your interest in my story. It means a lot.

Thank you for taking the time to answer our questions.

We wish her well with her new passion for cycling. What a great story.

More about Megan and her bike

While we wrote to Megan with the above questions after our last post about her trip, she was obviously thinking about the same ideas. The post My Saddles Are Sore on her blog is great reading about her bike baptism.

Megan can still use some help

An Indiegogo campaign at igg.me/at/murphyslawfilm is set up to offset the costs of transportation, filming and production of the documentary. The campaign is hoping to raise $25,000 by the end of day, August 17th. Please consider helping out.

And don’t forget to drop by murphyslawfilm.net to see how the see how the rest of her trip has gone!