The City completed several bike lane improvements over the year. This is especially important as the quality of our bike lanes is consistently a top concern with cyclists.

The extension of the McDonnel Street cycling lanes from Park Street to Water Street improved East-west links across the city. This link along McDonnel gives cyclists a clear route from Monaghan Road and the Trans Canada Trail at Jackson Park to the top end of the downtown core.

Reconstruction of Brealey Drive between Fleming Drive and Lansdowne Street includes a protected two-way cycling track in the boulevard on the west side of the road. Evidence from other cities clearly shows that protected bike lanes are the safest type of bike lane and get more cyclists active and moving around the city.

With the elimination of bike lane parking during the day, the City has completed stage one of improvements to these two critical components of the city bike lane network. Stage two calls for a bike lane buffer. We will be on the lookout for this in 2016.

Emerging out of the end-of-year construction are new on-road bike lanes along each side of Ashburnham Drive south of Maria Street towards Landsdowne Street. We will get a better sense of how effective these bike lanes are next year.

It was a definite celebration on November 10th when about 100 people showed up on the Trans Canada Trail (TCT) south of Technology Drive to celebrate the official opening of the newest section of the City trail system. Running between Lansdowne Street and the Lang-Hastings Trail just west of the Old Keene Road, the new section finally links our trail system to the TCT east of the city. Besides various city dignitaries and staff, many cyclists showed up representing several groups within the Peterborough cycling community including the Peterborough Cycling Club, The Mountain Bike Riders of Harold Town Conservation Area, TandemEyes, the Cycling Dudes and the cycling community at large. Also on hand was Michael Goodyear, TCT’s trail development manager for eastern Canada. After the official opening, many in the group took an impromptu group ride down the trail towards Keene. More coverage at KawarthaNOW.

The Rotary Greenway Trail is an important part of our trail network connecting Rogers Cove in East City all the way to Lakefield. Apart from a short stretch at Trent University, the trail offered a pleasant off-road route for recreational walkers and cyclists alike. At Trent, the path gave way to an unpleasant stretch of road, at least from a riding perspective. The view is quite nice if you had the courage to take it in. That all changed when the City built a short stretch of off-road trail from the end of the Tollington Bridge over the canal at the Peterborough Rowing Club to the Faryon Bridge. The trail has turned a rushed and harried part of the trip into a very pleasant stretch of trail with the river and the great architecture of the Trent West Bank buildings in full view.

Plans are underway to complete the short section north of the Faryon Bridge to the end of the trail to Lakefield at Eastbank Drive in 2016. 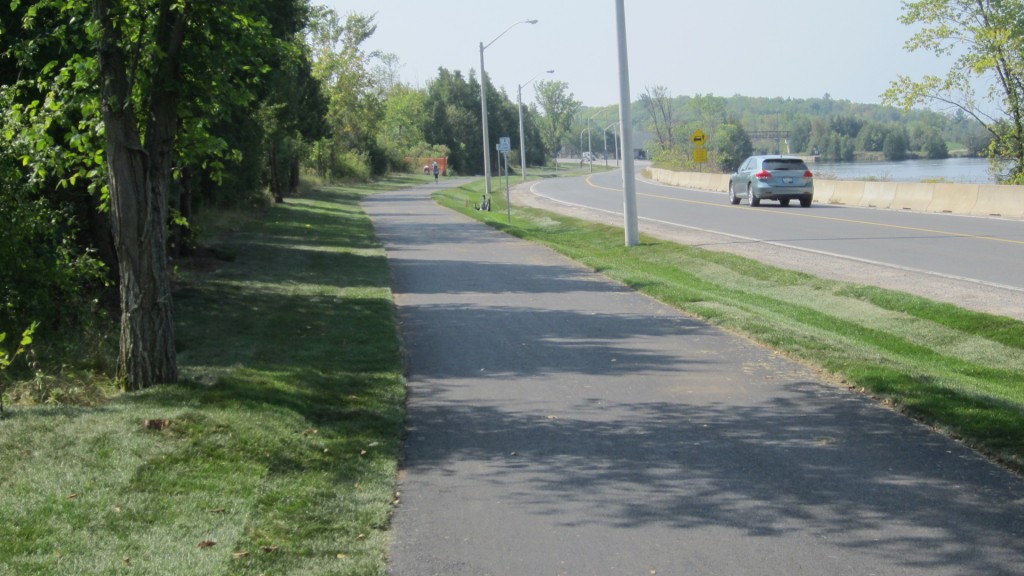 
Downtown Bridges Back in Service

While not really advances in Peterborough cycling infrastructure, cyclists were excited when the bike lanes were finally repainted on the Hunter Street Bridge and the pathway bridge at the CPR tracks reopened. The Hunter Street Bridge bike lanes had literally faded to black when the original paint, laid down in 2013, faded away. The City had various hiccups in finding a suitable replacement paint in time to get lines laid down by the end of 2014. Apparently, the wrong paint got shipped first, then it was too cold by the time the replacement paint arrived. Either way, the paint was down and doing its magic. Also out of commission for a while was the pathway bridge at the CPR tracks. It had been closed while the bridge was resurfaced due to pitting in the original surface. Again, it had taken the City a while to work out who was responsible and who would make the repairs. Walkers and cyclists alike were just happy to see the important link back in action. 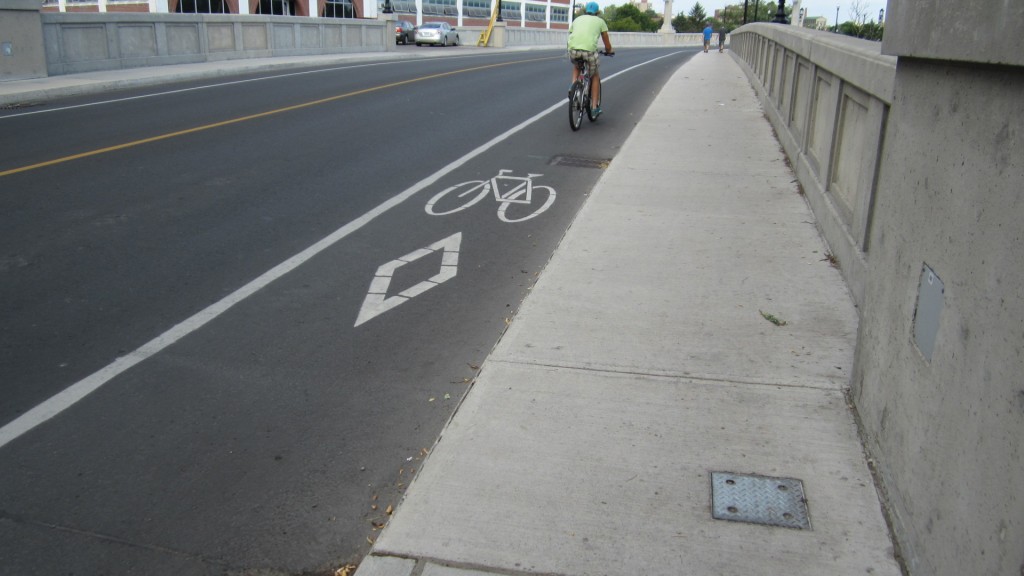 Bikelane on the Hunter Bridge

Signage for the Peterborough & the Kawarthas Classics cycling routes